The success of a company relies on the dedication of extraordinary individuals. Often times, history highlights the noteworthy achievements of great men. Of course, we know we cannot examine their successes without discussing the influence of great women.

Looking back on each generation of S. Martinelli & Company, we find stories of hard working, dedicated women who contributed their talents to the family business. By presenting some of their stories, we want to honor the contributions women have made, and continue to make, to the success of this company.

Jane Leask was born in Scotland and was an immigrant to the United States. After the death of her father, her mother moved the family from Scotland to America, where they settled in search of a new beginning. On July 3, 1889, Jane married Stephen G. Martinelli, the founder of S. Martinelli & Company. Together, they built a home next to the hard cider plant where they raised their three children. In 1917, after 28 years of marriage, Jane’s world was forever altered when Stephen Martinelli passed away and their son, Stephen G. Martinelli, Jr., was stationed in World War I. Not only had the family just lost both husband and father and the country at war, but the production of alcohol was teetering toward a national ban. It was suddenly up to Jane to help keep the family business together in the midst of National Prohibition turmoil.

Up to this point, Martinelli’s made their name off the production and sale of hard cider. With Prohibition looming as early as 1916, when surrounding states and cities were going dry, the family knew they needed a non-alcoholic version of their hard apple cider. Before Stephen, Jr. left for the war, he developed a new, unfermented cider product.

After her husband’s death in 1917, Jane assisted their youngest son, Leask, in selling this new product to local grocers. In the years to come, Martinelli’s would build their business around this new, unique product. Jane’s role in making her son’s creation successful is undeniably significant, and she left her mark in history through the correspondence with Stephen, Jr., by keeping him updated on production as he was stationed at war. 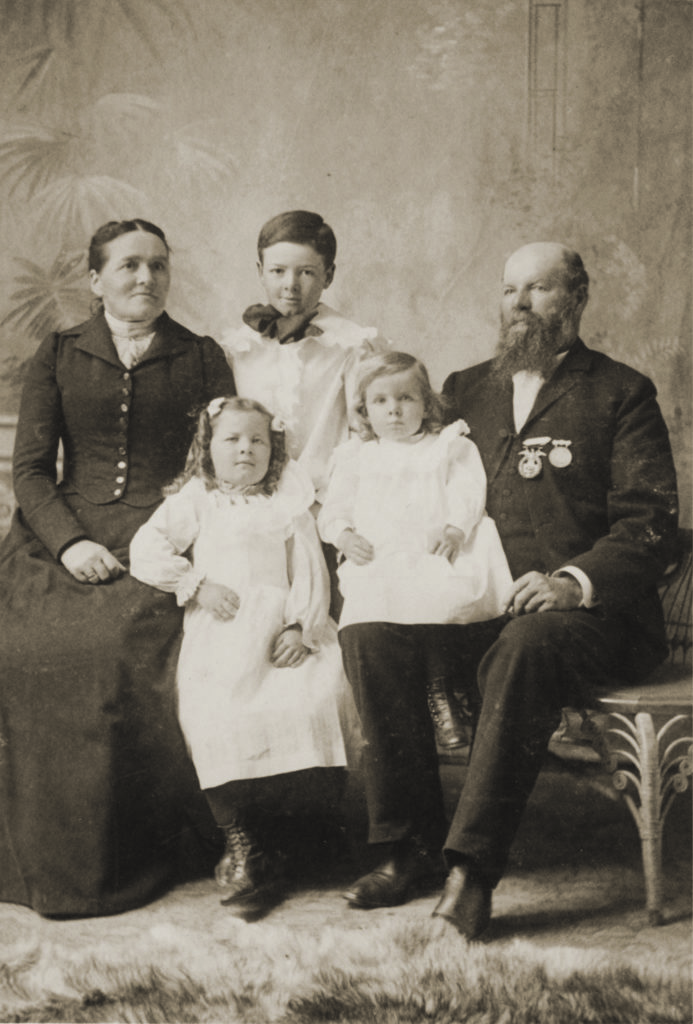 Hazel Cockroft was born in Oakland, CA in 1891, the daughter of English immigrants. She married Stephen G. Martinelli, Jr. in Watsonville, in 1919, after his return from WWI. Her contributions at S. Martinelli & Company were many as she supported the business through The Great Depression, a time when her husband was working tirelessly to keep the cider house doors open. Further, with their children almost grown, Hazel helped in the facility during WWII, alongside her daughter, Alice Martinelli. Their efforts to keep the business running while most male employees were abroad, continues to inspire us today.

According to the records Alice kept on her mother’s ancestry, prior to marrying Stephen, Hazel had been appointed clerk in the quartermaster Corps of the Army in San Francisco during WWI, where she took oath of office in 1920. Her contributions continue as she supported women’s right to vote in the first election following the passing of the 19th amendment in 1920.

Hazel passed away before the publication of her ancestry book could be completed. The contents were so cherished by the family, that they worked to confirm the book’s publishing in 1962. In the forward she wrote, “My great hope for this book is that it will be of interest to our present family and to all those who are to come; and that some of them will continue the search of the past and keep up the records of the future.” Her hard work and research offer an invaluable glimpse into the history and success of family business. 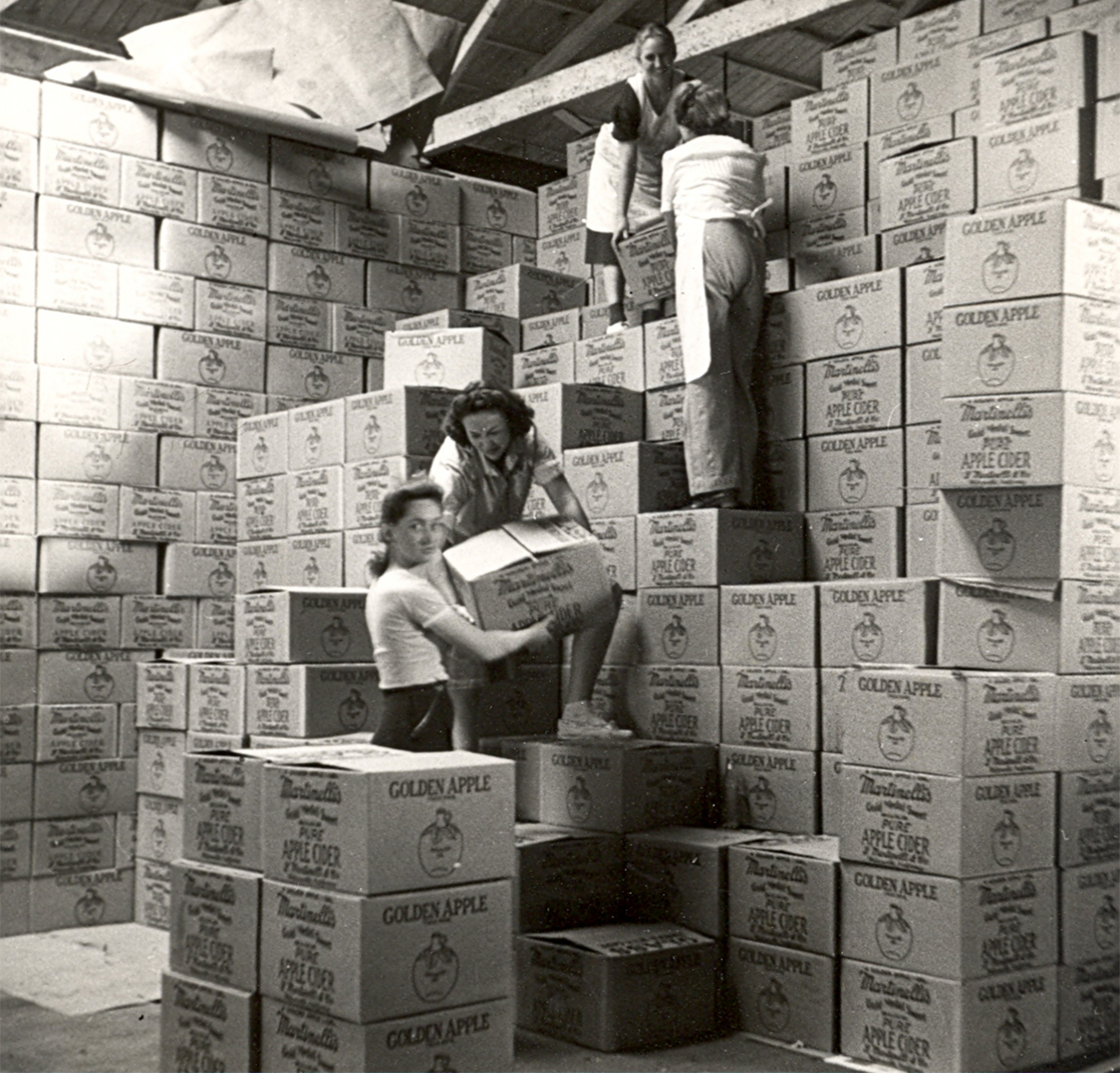 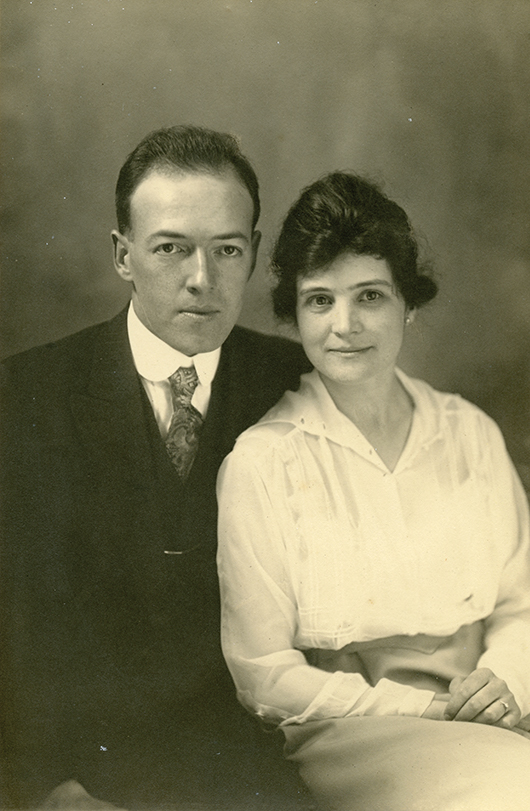 Alice Martinelli was born in 1926 in Watsonville, CA. Like her mother, Alice was a keeper of records. After her parents’ deaths, Alice went on to preserve and transcribe the letters between her grandmother, mother, and father during WWI. In an early draft of the forward to these transcriptions she wrote, “They are of historical significance and family interest. They give a feeling of what Watsonville was like in those years before, during, and after WWI… of particular interest is the insight given to the early workings of the S. Martinelli Cider Company.”

Alice’s own experience gives insight to the years during WWII. She spent her early teen years working in her father’s office. When WWII broke out, she, like many women during the time, worked on the bottling line in the cider plant alongside her mother, Hazel, to help keep the business running while many men were deployed. After her teen years in the cider plant, she went on to receive her B.A. in Art from the University of California, Berkeley. After returning to Watsonville, she later became a member of the Pajaro Valley Historical Association, working to preserve her family’s history. If not for her dedication to preserving their correspondence, the details of how the family kept the business running after losing their founder during WWI might have remained a mystery. 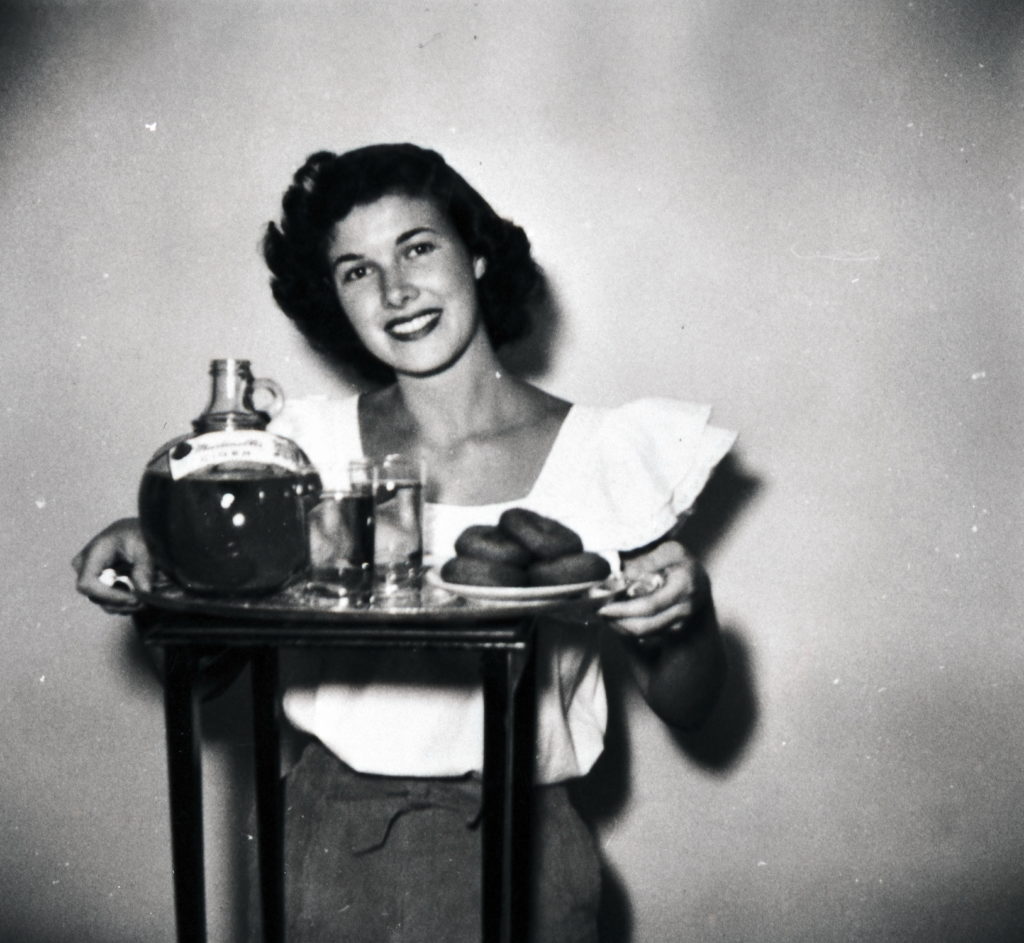 Sylvia Brown is the granddaughter of Hazel and Stephen G. Martinelli, Jr. and represents the 4th generation of Martinelli women. Sylvia grew up visiting her grandparents at the factory and drinking lots of soda and cider, which her parents didn’t always let her have at home. One of her first jobs at the family business was during the company’s 100th anniversary. The kids in the family helped stamp stickers on brochures and got paid around 50 cents an hour to do it. In 1957, she and her brother, Peter, posed for a Martinelli’s cider ad. This remains one of our most precious images in our company archives. 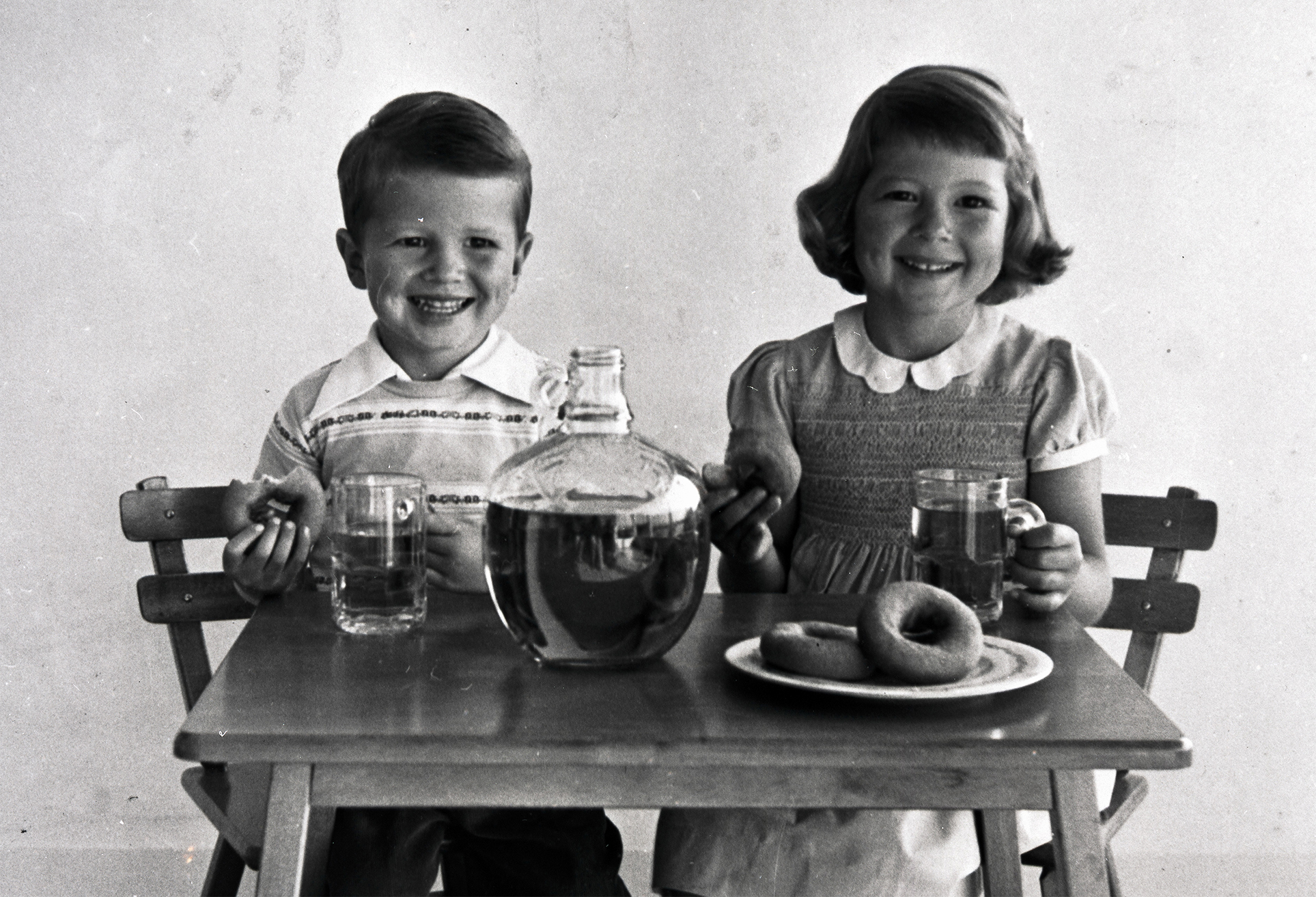 Sylvia (right) and her brother, posing for a 1957 Martinelli’s ad

In her teen years, Sylvia went to Watsonville High school across the street from the East Beach facility and worked in the Martinelli’s office answering phones before graduating from University of California at Berkeley a few short years later. In her adult years, Sylvia provided two decades of dedication to the company through public relations services, editorial coverage to support marketing initiatives and reinforcing Martinelli’s unique brand image. Today she is a long-standing member of the S. Martinelli & Co. Board of Directors and continues to be an influential member of the Martinelli Family.

The Extended Family of Martinelli Women

Leslie Wustrack began working at Martinelli’s in 1989, but her relationship with the cider company itself began when she was in just the third grade. She remembers taking class field trips and having lunch and apple juice on the lawn of the historic S. Martinelli & Co. factory on East Beach in Watsonville. Today, she holds the crucial role of Grower Relations Manager, working closely with S. Martinelli & Co.’s many apple growers. This includes developing contracts and coordinating the apple harvest, all while nurturing ongoing relationships between the cider company and the farmers. She has described her work as an overlap between the business and the farmers, as she witnesses where the making of cider truly begins: “[This is] the heart and soul of the earth, as my grandfather used to say.”Part of Leslie’s role in grower relations ensures that S. Martinelli & Co. always has the right blend of apples to maintain its Gold Medal standard. She manages the daily blend of apples that go into each batch, which means she keeps each apple juice tasting the very best! 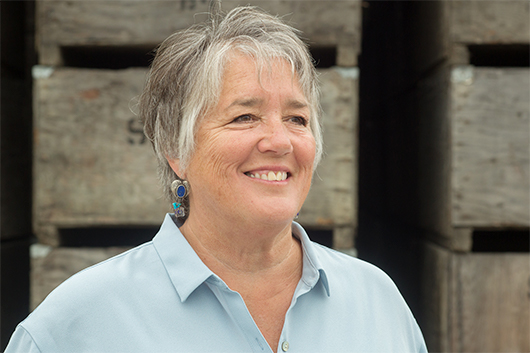 Leslie has also been an important part of Martinelli’s new Orchard Development program. She has worked closely with current Chairman of the Board, John Martinelli and Martinelli’s President & CEO, Gun Ruder, in the process of leasing land, revitalizing orchards, and purchasing trees so S. Martinelli Co. can grow its very own apples. These trees have been planted, and apples should be ready for picking in upcoming years. “We have to order trees two years in advance,” Leslie noted.

When asked what Leslie likes most about her job, she stated, “I love what I do! It’s a neat family and company to work for… every day is different,” she said with a smile.

Gloria Bell is S. Martinelli & Co’s Director of Human Resources. The daughter of migrating farm workers in the US, she attributes her work ethic to her upbringing. “Our backgrounds make us who we are today. I adapt to change because I was a child of change,” she noted. Gloria has worked with many companies in HR and safety, as well as internationally to build HR foundations at different locations. Gloria’s expertise and accolades have made her a great asset for the company. She was the recipient of DuPont’s Agricultural Safety Professional “Always Safe” Award in 2012. In 2013, she was appointed by Governor Jerry Brown to sit on the Employment Training Panel. Looking back on women’s historical contributions to the workplace, Gloria is reminded of WWII and how women really stepped in to fill the jobs men had to leave. “Women really built this country.” She stated this not only happened all over the world, it also happened here. “Watsonville is unique,” she said. “We have a strong base in this community and industry. We are influential in the world.” 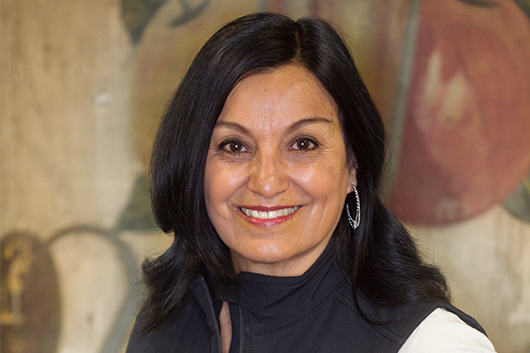 Being in a leadership role at Martinelli’s, Gloria witnesses women working on the line, including those working the graveyard shift. She knows they’re making a sacrifice for their families. Her goal is to keep these people, both the men and women, safe on the job. To send them home “healthy and whole.” She is especially dedicated to the wellbeing of employees.

With her role at Martinelli’s, Gloria is proud to be a woman on the company’s Executive Team. She brings experience in leading HR teams and safety. She appreciates the commitment Martinelli’s maintains to equal opportunities and enjoys seeing many women apply to positions that can be seen as having been traditionally expected to be filled by men. She can see how this work is empowering both men and women in the industry and commits herself to helping S. Martinelli & Co. continue to do great things like this.

Olga Figeuroa moved to Watsonville when she was 17 years old. While working, she attended Cabrillo College for education, and worked as a pre-school teacher for 19 years. She recalls working two jobs to help raise her family. Later, after retiring from education, she learned of a position opening at S. Martinelli & Co., and she applied. At first, she applied for a job as a forklift driver in the warehouse, and soon began working in the Utilities department as Utility Attendant. In recognition of her incredible work ethic, her ability to learn fast, and the positive feedback from coworkers across multiple departments, she earned the 2018 Employee of the Year award. 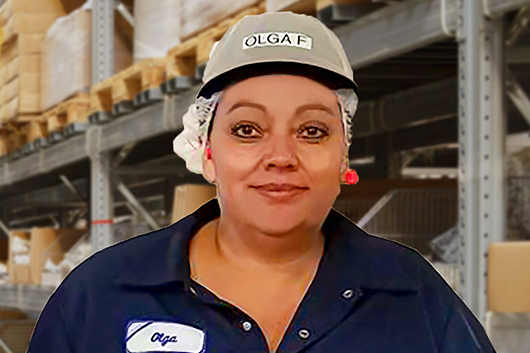 Olga describes herself as someone who works hard, and who likes to help her coworkers. She explained that when she does this, “You learn. You learn about your job, and many things about other jobs. I like to help.” She enjoys her job because of the many different facets involved. “I drive forklifts, I’m working around the warehouse, I do many things.”

When asked what she likes most about Martinelli’s, she explained it is, “the friendly people.” She particularly enjoys how involved the Executive Leadership Team is with all their employees – how they treat everyone equally and with respect. “These people are different. You feel special,” she said.

As we can see from these incredible individuals, being a part of the Martinelli family today does not mean one has to share their last name. Thanks to the hard work of the people before us, S. Martinelli & Co. has grown significantly and is proud to hire people from so many different backgrounds and expertise. The contributions of women in this business today continue to be as vital as those who preceded us. Cheers to them! 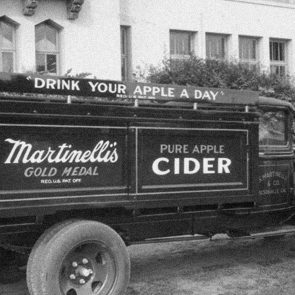 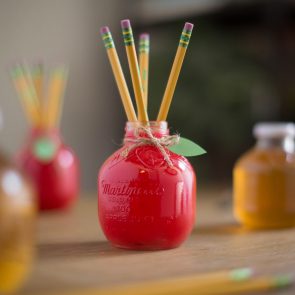 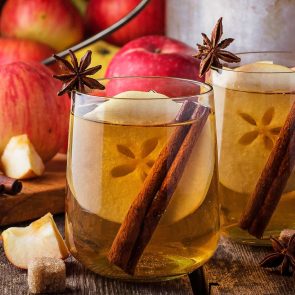