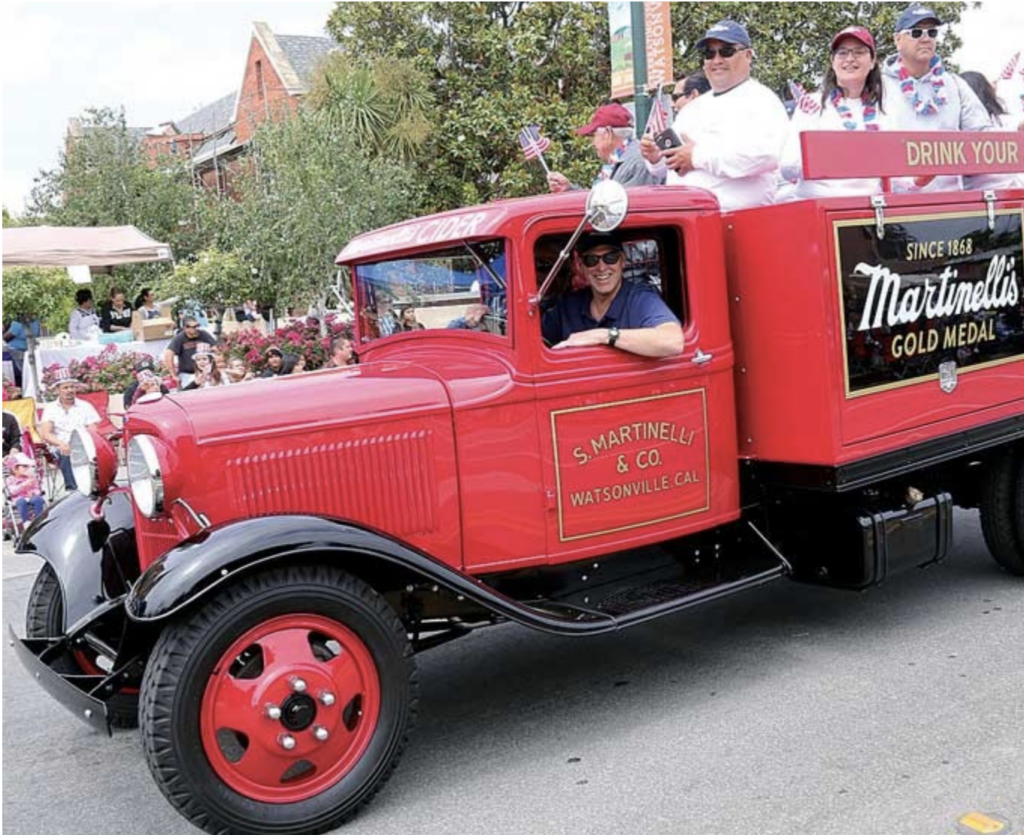 (John Martinelli of S. Martinelli & Co. steers a 1932 Ford Model B truck along the route of the Spirit of Watsonville Fourth of July Parade downtown Wednesday. Photo by Tarmo Hannula/Register-Pajaronian)
WATSONVILLE — When John Martinelli drove his company’s 1932 Ford Model B truck down Main Street during the Spirit of Watsonville Fourth of July Parade on Wednesday, it was a mirror image of a scene from seven decades ago.
In a photograph from S. Martinelli & Co.’s archives, the same truck is shown rolling down Main Street in a parade commemorating the end of World War II. With the truck and the Watsonville company steeped in so much history, it was only fitting that Martinelli was the parade’s grand marshal as the apple cider company celebrates its sesquicentennial this year. In the 1930s and ‘40s, longtime Martinelli’s employee Fred Hillman hauled apples and finished products in the truck to deliver them around town.
Once it was retired after 15 years of service, the truck was converted into a parade float. The flat bed was replaced with panel side boxes to allow people at community events to sample the latest Martinelli’s products. But somewhere along the way, the truck left the hands of the company.
It wasn’t until 20 years ago when the Martinellis discovered the truck’s fate. John Martinelli and his father, Stephen C. Martinelli, were meeting with the Jewells of Sebastopol apple grower Jewell Ranch at the company’s East Beach Street plant, when the group admired a framed 1945 photo of the truck.
Martinelli had a burning question for his father after viewing the photo.
“I turned to him and said, ‘You know dad, we’re packrats and we keep everything,’” Martinelli recalled. “Why the hell didn’t we keep that truck? We should have that truck in our archives.”
Before his father could answer, the Jewells did for him.
“Out of nowhere the Jewells turn to me and say, ‘Well that’s because we have it. Your grandfather gave it to us 20 years ago,’” Martinelli said. The Jewells agreed to give the truck back to Martinelli’s, and it sat in a warehouse until about two years ago, when the company decided it would be a fitting restoration project for its 150th anniversary. 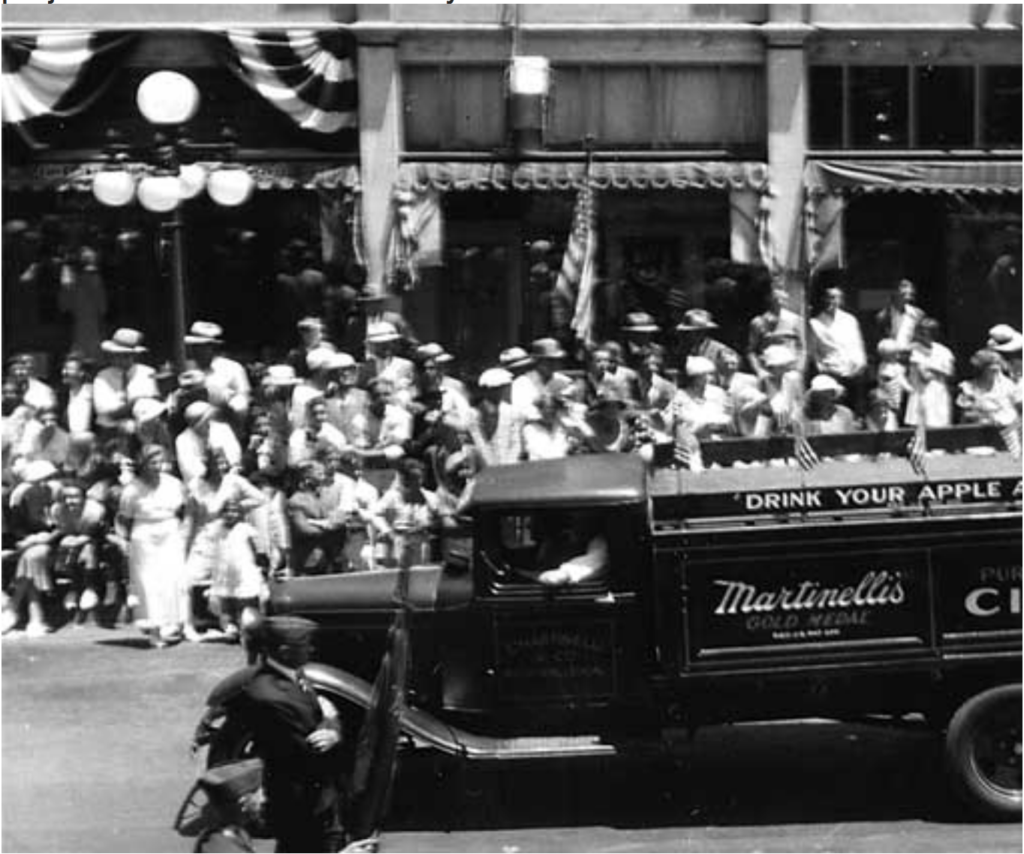 S. Martinelli & Co.’s 1932 Ford Model B delivery truck is shown in a World War II parade in Watsonville in the 1940s. Photo courtesy of S. Martinelli & Co.
It was an ambitious project. The truck was nothing but a cab and frame, and required a complete rebuild. Martinelli praised the work of Steve Balzi, who stripped it down “to the bare metal and built it from the ground up.” Hank Wempe also worked on the body, while Roy Large fabricated the side panels. After two years of work, the truck made its debut Wednesday at the Spirit of Watsonville Fourth of July Parade.
•••
From a small shed to the world
At the height of the Gold Rush in 1850, a Swiss immigrant in search of a better life was drawn to California and its promise of riches.
His brother joined him in the state soon after. But little did they know that they would find gold not in mines, but growing on trees.
About 18 years before S. Martinelli & Co. was founded and the City of Watsonville was incorporated, Luigi Martinelli migrated to California, eventually making his way to the Pajaro Valley, and began to farm beans and grains. Luigi’s brother Stephano followed him about nine years later, and together the brothers discovered the potential of Pajaro Valley apples.
They Americanized their names to Stephen and Louis, and Stephen made soda water in a small shed. As business picked up, Stephen started making ginger ale and orange champagne, and later, in 1868, Stephen created fermented apple cider made from his brother’s apples.
It was then that S. Martinelli & Co. was born, a resilient company that has survived two World Wars, Prohibition and the Depression.
Still family owned and operated, the company is known around the world for its sparkling apple juice, which continues to be made from domestically grown apples. Perhaps no other company born in Watsonville has had such a global reach as S. Martinelli & Co. Martinelli products are sold in 41 countries on five continents, with labels in English, French, Spanish, Korean, Chinese and Japanese.
“It is very safe for us to assume, that in my greatgrandfather’s wildest dreams, he could not have imagined we would be celebrating his company’s 150th anniversary this year,” said John Martinelli, the company’s fourthgeneration CEO.
A blend of apple varieties is used to achieve Martinelli’s distinctive tart-sweet flavor. The locally grown Newtown Pippin, Gala, Fuji, Granny Smith, Jonagold, Mutsu and Honeycrisp apples are thoroughly washed, hand-sorted and fresh-pressed. The juice is then pasteurized and cooled in the bottle, with the result being an extended shelf life without chemical preservatives or sweeteners.
Over the years Martinelli’s has expanded its product line to include sparkling juice blends including cranberry, marionberry, grape, pomegranate and mango. To this day, Martinelli’s is best known for its sparkling cider in champagne-style bottles and apple juice in its iconic apple-shaped glass bottles, developed in the 1930s along with the slogan “Drink Your Apple a Day.”
And it pumps them out quickly. At the 50-year mark, the company was producing about 10,000 gallons of hard cider annually. It now hits that number in two hours, according to Martinelli.
•••
‘Tripping points’
Like anything that has survived for 150 years, S. Martinelli & Co. has seen its share of struggles and successes that shaped the company to the juggernaut it is today. The adoption of the 18th Amendment in 1920, banning the sale and consumption of alcohol in the United States, nearly spelled the end of S. Martinelli & Co., whose apple cider contained alcohol.
Stephen Martinelli’s son, Stephen G. Martinelli Jr., who was an architecture student at UC Berkeley at the time of Prohibition, sought out food technology professor W.V.
Cruess to help save the business.
The duo developed a pasteurization process that allowed non-alcoholic juices to be preserved for one year. The new non-alcoholic product proved to be a hit. “Fortunately his vision was successful, and created the backbone of the company we are today,” John Martinelli said.
Although the company experienced its period of largest growth from 1920-1945, producing 600,000 gallons of cider annually, according to Martinelli, it was not making money, as its profits were constantly being reinvested to keep up with the growth.
More recently, in April 2011, the 83-year-old Apple Growers Ice & Cold Storage building on West Beach Street burnt to the ground after catching fire from a roof repair, destroying more than $2 million worth of apples in cold storage as well as bottled, labeled and packaged juice products.
“We’ve had tripping points throughout our entire history,” Martinelli said.
•••
Coming full circle
S. Martinelli & Co. is celebrating its sesquicentennial by taking the company back to its roots. The company recently launched its 1868 Hard Cider, available in 12-ounce bottles packed in 12-pack cartons that feature vintage hand drawn illustrations from Martinelli’s original hard cider line.
“We are very excited about the launch of our 1868 Hard Cider,” said Gun Ruder, president of S. Martinelli & Co. “It’s a great way for us to remember Martinelli’s rich heritage, as most people don’t realize that the company sold hard cider prior to Prohibition.”
Martinelli’s developed its new 1868 Hard Cider in partnership with the Gordon Biersch Company at its bottling facility in San Jose. It is made from fresh-pressed U.S.-grown apples that are fermented with no additives Martinelli’s 1868 Hard Cider is available in Costco stores in Northern California. 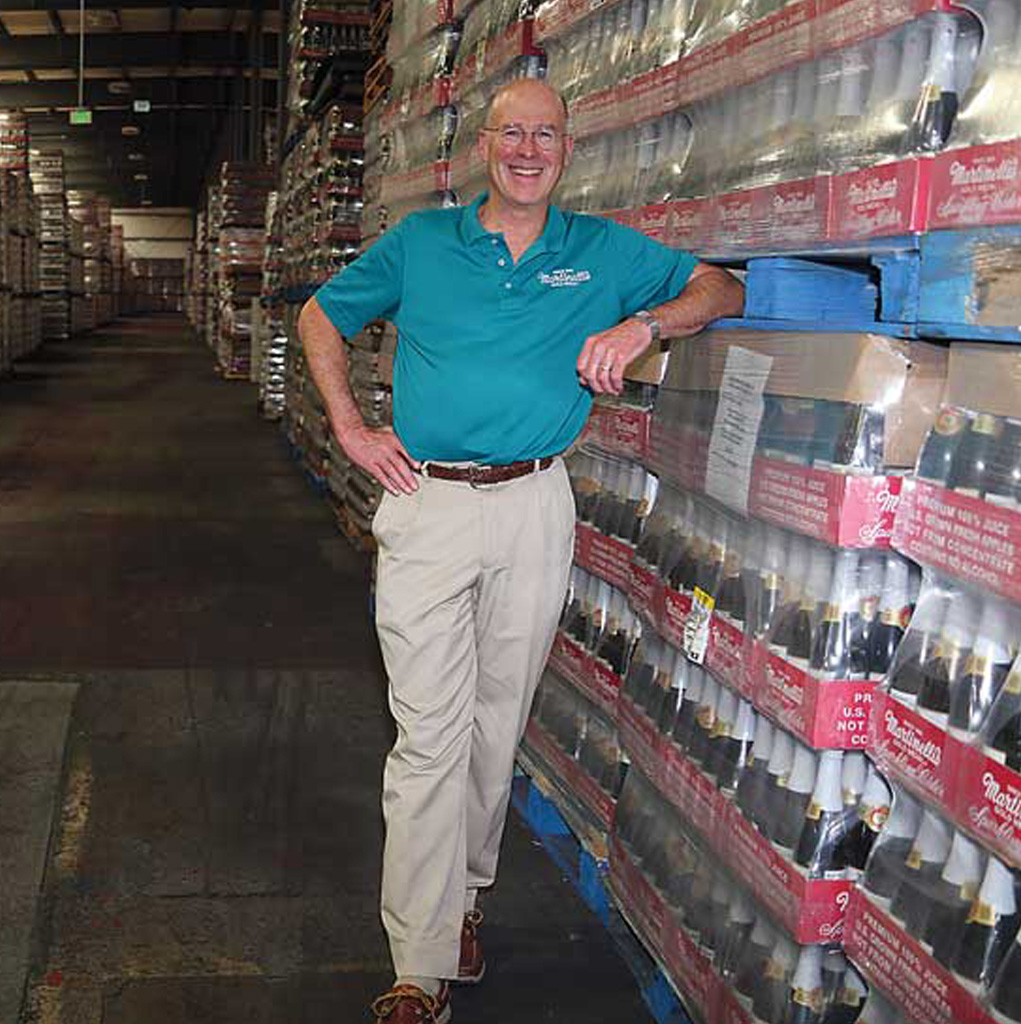 John Martinelli of S. Martinelli & Co. is shown surrounded by the company’s juice products at his Watsonville plant. Photo by Tarmo Hannula/RegisterPajaronian
Also hot off another kind of press is a commemorative book, written by John Martinelli and Lindsay Huysentruyt, describing the history of the company throughout the decades.
Martinelli said he spent the last two years searching for artifacts and historical photos to include in the book. Many of what Martinelli calls “treasures” can be found in its Company Store on Harvest Drive, from old bottles, tools, crates and more.
While S. Martinelli & Co.’s milestone years have been a cause of celebration, they have also been a time of loss. The company’s founder passed away during the 50th anniversary, and the second generation leader Stephen G. Martinelli Jr. died four years before the 100th anniversary. Stephen C. Martinelli died in November 2017, just a month before the beginning of the company’s 150th year.
Now led by the fourth generation, John Martinelli said the company has continued to beat the odds.
“I could not be more proud to be the one at the helm at this exciting time in our family’s history, and I am confident we are positioned to continue doing what we do best, for generations to come,” he said.