Maintaining the Highest Quality Standards is Key to Success 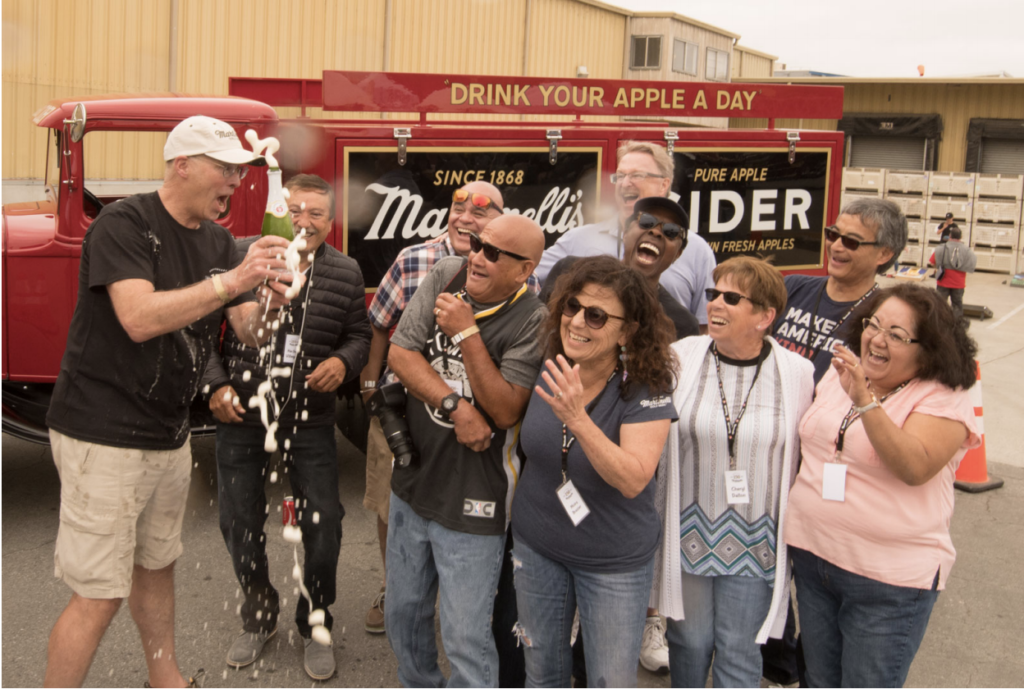 John Martinelli, CEO of S. Martinelli & Company, celebrates the company’s 150th anniversary with employees in Watsonville, Calif. Family owned and operated Martinelli’s, founded in 1868, still resides in its original location on the Monterey Coast of California.

Watsonville, CA, April 26, 2018 –Family owned and operated S. Martinelli & Company is celebrating its 150th anniversary this year. Martinelli’s is known across the country and around the world for producing the highest quality sparkling cider and apple juice pressed from 100% U.S. grown, fresh apples. The company was founded and still resides in Watsonville, on the Monterey Bay Coast in Central California. The city of Watsonville and the local RegisterPajaronian newspaper are celebrating their 150th anniversaries this year as well.

Martinelli’s was founded in 1868, the year Ulysses S. Grant was elected President and the 14th Amendment was adopted. During its rich 150-year history, the company faced many challenges ranging from World Wars to Prohibition to the Depression, and an increasingly competitive marketplace. Despite the ever-changing environment, Martinelli’s never changed its mission to produce the highest quality sparkling cider and apple juice, containing no chemical preservatives, or sweeteners, made from 100% U.S. grown, hand-picked fresh apples.

“Our number one goal has always been to produce the highest quality juice products with the freshest taste possible,” explained John Martinelli, CEO and fourth-generation family member. “We press our juice from a unique blend of the most flavorful apples grown in the Western U.S. in much the same way we did 150 years ago. While we are committed to our time-honored traditions that create premium quality, we have embraced technological improvements in temperature control, filtration and bottling that preserve the fresh apple flavor from the press. To be sure we deliver on this promise, I taste every batch we make.”

A unique blend of premium apple varieties is used to achieve Martinelli’s crisp taste and distinctive tart-sweet flavor. The locally grown Newtown Pippin, Gala, Fuji, Granny Smith, Jonagold, Mutsu and Honeycrisp apples are thoroughly washed, hand-sorted and fresh pressed. The juice is then pasteurized and cooled in the bottle to retain its fresh apple flavor. The result is a 100%  juice product that has extended shelf life without chemical preservatives or sweeteners.

In celebration of its 150th anniversary, Martinelli’s has launched a special edition label for its sparkling cider and is hosting several celebratory events for the local community with a restored 1932 Ford Model B truck. “This truck dates back to my grandfather’s era and was originally used for hauling apples and delivering juice to customers. In later years the flat bed was replaced with panel sided boxes to serve juice to people at parades, fairs and community events. Using old photos as our guide, we restored the Truck to look like it did 86 years ago – with a few enhancements like a flat screen TV to show historical photos and videos,” added Martinelli.

Over the years Martinelli’s has expanded its product line to include innovative sparkling juice blends including Cranberry, Marionberry, Grape, Pomegranate and Mango. To this day, Martinelli’s is best known for its sparkling cider in champagne-style bottles and apple juice in its iconic apple-shaped glass bottles, developed in the 1930s along with the slogan “Drink Your Apple a Day®”.

Martinelli’s, a Certified Green Company, is committed to applying sustainable practices that focus on water and energy conservation, recycling and agricultural land preservation. The company has also maintained close relationships with local and regional growers to ensure the freshest and most flavorful supply of premium tree-ripened apples. Martinelli’s offers an increasing number of organic products and is investing in new organic orchards to increase its supply.

About S. Martinelli & Company
The S. Martinelli & Company produces the highest quality apple juice and sparkling cider made from 100% U.S. grown, fresh apples. Martinelli’s products are 100% juice and contain no chemical preservatives or sweeteners. The family-owned and operated company is celebrating its 150th anniversary in 2018.
For more information visit http://www.martinellis.com.