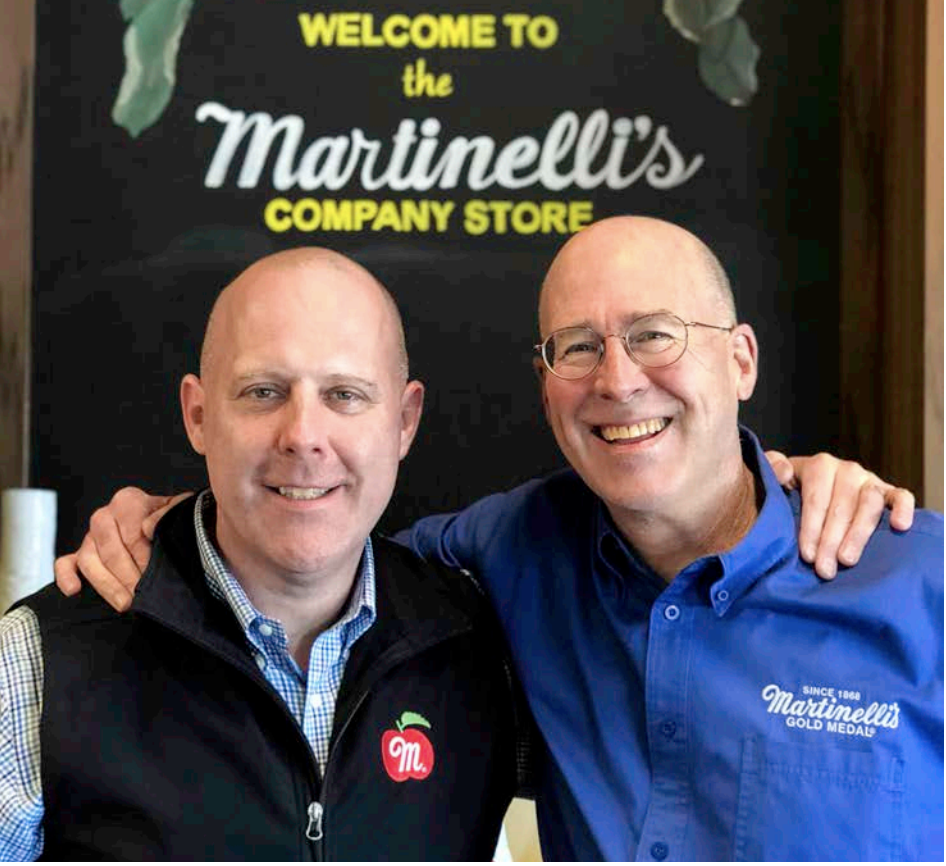 John Martinelli (pictured right) is a fourth-generation family member of S. Martinelli & Company. He was President for 15 of his 37 years with the company and has transitioned to CEO. Gun Ruder (pictured left) served as Vice President and CFO for Martinelli’s since August 2013, and has been promoted to President. He will retain the CFO role indefinitely.

Watsonville, CA, March 2, 2018 – S. Martinelli & Company recently announced two significant changes to its executive management team. John Martinelli, who served as President for 15 of his 37 years with the company, has transitioned to CEO, and Gun Ruder, who has served as Vice President and CFO for Martinelli’s since August 2013, has been promoted to President and will retain the CFO role indefinitely.

“This year represents an important milestone for Martinelli’s,” explained John Martinelli, CEO, S. Martinelli & Company. “Not only are we celebrating the company’s 150th anniversary, we are making important operational and leadership changes to ensure we maintain our position as the leading producer of sparkling apple cider and apple juice.”

In his previous role as Vice President, Gun had already assumed the day-to-day management of the company’s operational, financial, marketing and sales initiatives, while overseeing the development and implementation of the company’s strategic plan, including the largest investment in Martinelli’s production infrastructure in the company’s history. Over the next two years, the company will expand and consolidate its production functions in its West Beach plant and close its historic East Beach plant across the street from Watsonville High School.

In November 2017, as these leadership changes were being implemented, thirdgeneration family member and former President, Stephen Martinelli passed away at the age of 87, after a 58-year tenure with the company. Stephen joined the family owned and operated business as an Assistant Manager in 1955, became President when his father passed away in 1964 and retired in 2013.

Stephen and John had the great fortune to work side by side for 33 years, and under their leadership, Martinelli’s achieved record growth through plant acquisitions, equipment modernization and simple but effective marketing strategies. Stephen was most proud of his relationship with local apple growers who had transitioned over the years from packing their fruit for the fresh market to growing tree-ripened apples with handshake contracts to produce the unique flavor of Martinelli’s Gold Medal apple juice and sparkling cider.

John and Gun look forward to continuing to build on the strong foundation Stephen built and carrying on the impressive legacy he left behind. “It is an honor to lead this historic company,” said Gun Ruder, President. “I am excited to work with John and our management team to continue to grow and strengthen our business as we look forward to the next 150 years.”

About S. Martinelli & Company
The S. Martinelli & Company produces the highest quality apple juice and sparkling cider made from 100% U.S. grown, fresh apples. Martinelli’s products are 100% juice and contain no chemical preservatives or sweeteners. The family owned and operated company is celebrating its 150th anniversary in 2018.
For more information visit http://www.martinellis.com.